If you thought what I showed you in Part 2 was crazy, wait till you see what I have in store for you now.

While airlines hate when you buy return tickets even though you’re only planning to fly one-way, they despise it when you do the trick I’m going to show you now called Hidden-City Ticketing.

The way it works is as follows:

Hidden-city ticketing is when you buy a ticket from point A to point C with a connection at point B, but you are actually only interested in going to point B so you get off there and skip the flight to point C.

You might be wondering why someone would do that since prices for plane tickets are calculated based on distance flown, right?

Confused?  I don’t blame you, so let’s use an example to see it in action!

Let’s say you want to fly from Toronto to Houston one-way on March 7th.  This is what we get on Google Flights after sorting by price: 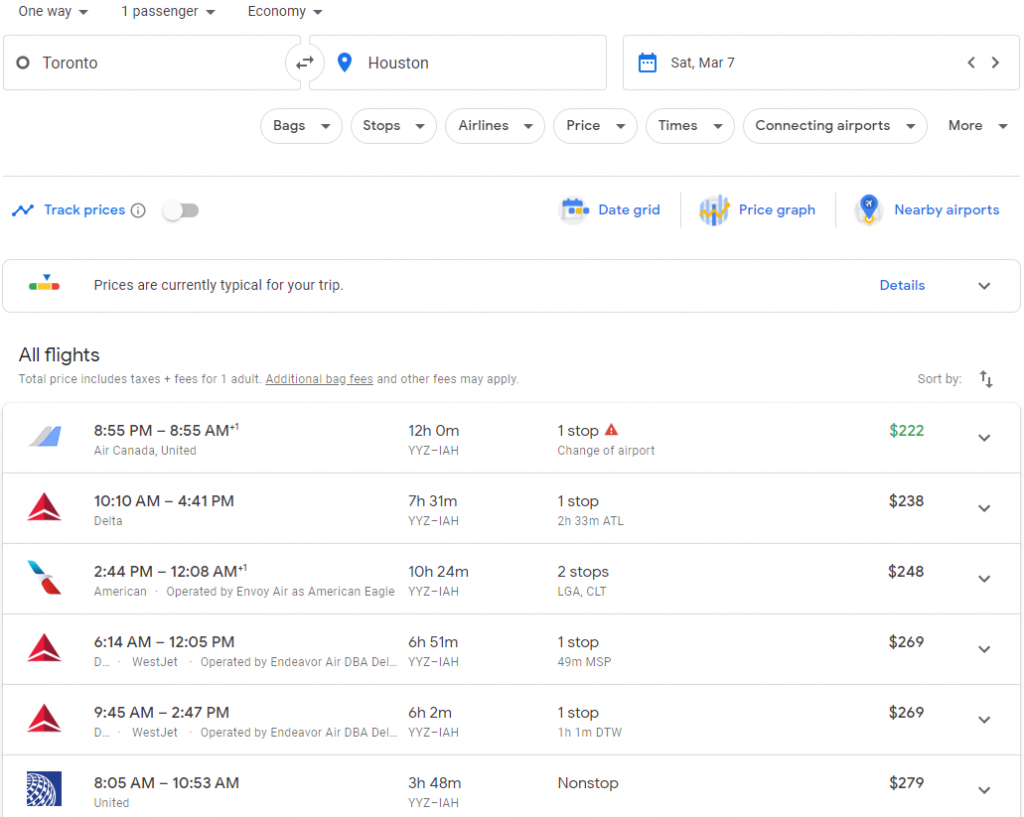 The cheapest flight we see here is a 12 hour trip with a change of airport at the layover location for $222.  Not ideal.

Obviously, we want to save money, but we also don’t want to spend 12 hours traveling when a direct flight would only take 4 hours!  At the end of the list we see the cheapest direct flight available for $279.

So how do we find a hidden-city ticket for this flight?  Well to do that, we need to use a different website called Skiplagged.

When I do the exact same search on Skiplagged, this is what I see: 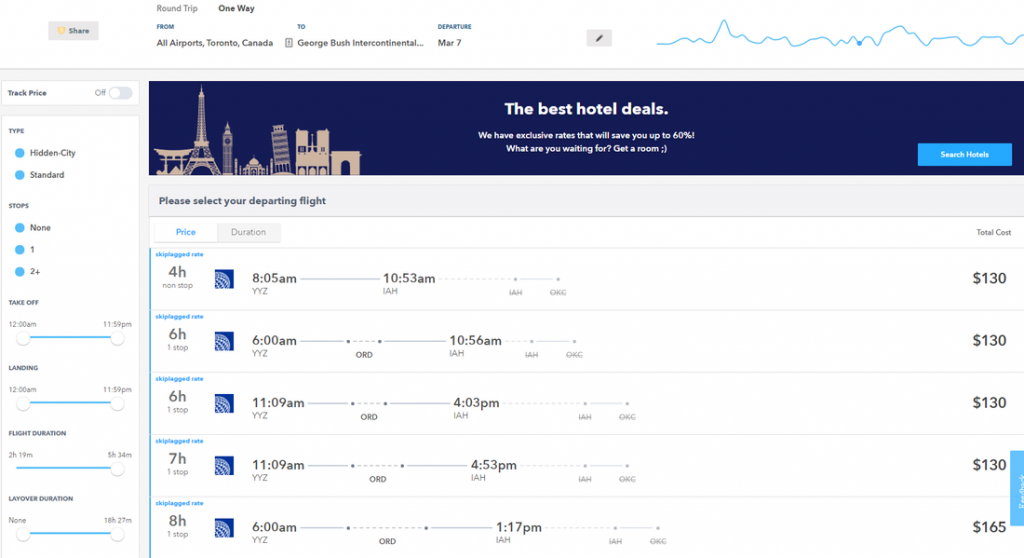 How is this possible?

Well if you look closely, you’ll notice that the flight on Skiplagged continues on from Houston to Oklahoma City.  The $130 price is actually for the entire trip to Oklahoma City and not for the direct flight to Houston.

We can confirm this by checking the price for the Toronto-Oklahoma City flight on United’s own website: 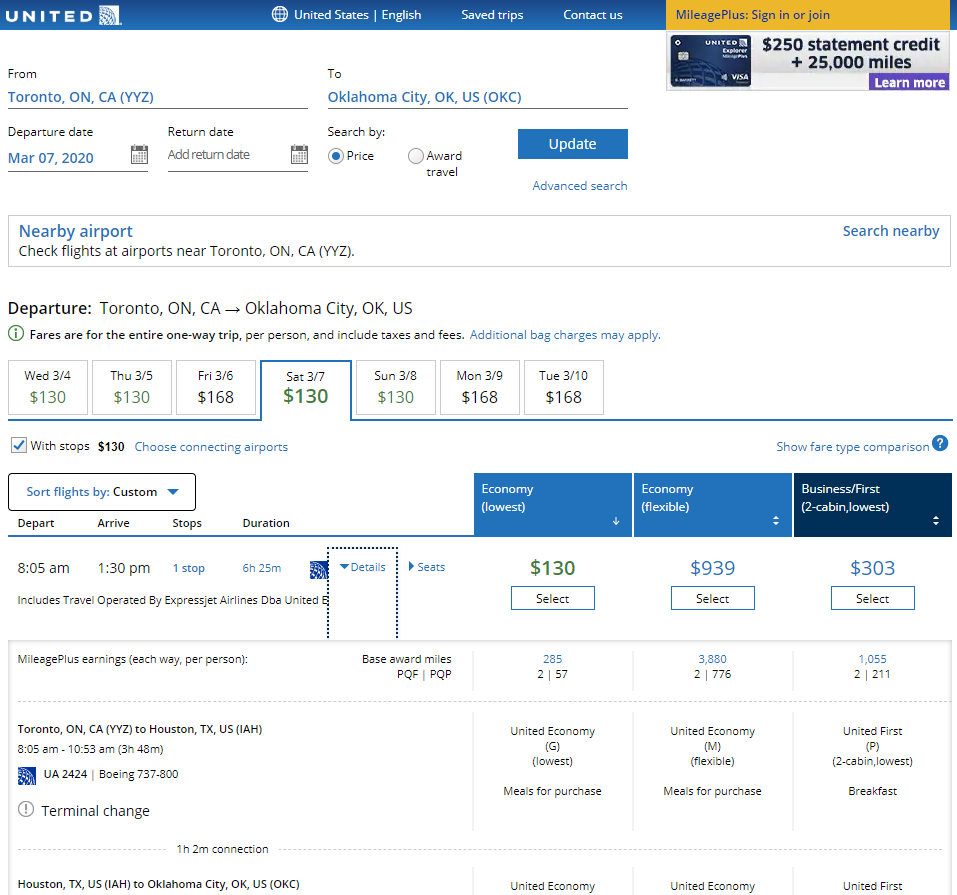 This is why Skiplagged is awesome.  Its algorithm is smart enough to pick up that this United trip to Oklahoma City has a connection in Houston, which is where you want to end up, so it includes it in your search for flights from Toronto to Houston.

I know what you’re thinking, there’s gotta be a catch, right?

The answer is yes, there is.

Hidden-city ticketing is not perfect.  While it is amazing, it can be risky and there are three things that you need to be aware of before you start using this method of traveling:

1. You cannot have any checked luggage.  This is because the airline will assume that you plan to make it to Oklahoma City, not get off at Houston, so it will take your checked luggage to Oklahoma City for you.  Therefore, if you want to take advantage of hidden-city ticketing, you must make sure you only have carry-on luggage.

So in the event that for whatever reason, they re-route your first flight to go from Toronto to Chicago instead of Toronto to Houston, there is nothing you can do (unless you have some sort of refund or ticket cancellation available).  On the bright side, flights very rarely actually get re-routed so while this is a possible risk, it is unlikely to happen.

3. You cannot get return-tickets this way, only one-way tickets.  This is because the moment you miss a flight at any point on your trip, the airline will cancel the rest of your itinerary.

They do this to try to deter people from using the strategy I told you about in Part 2 to book cheaper return flights when they only plan to go one-way, however it only works in deterring those that plan to skip their outbound flight and only take the return flight and not the other way around, which is actually more common.

Besides, doing it twice on the same trip would really put you on the airline’s radar anyways which is not a good thing as you’ll see in #4.

4. Airlines hate hidden-city ticketing.  I can’t emphasize enough how much they hate it.  They hate it so much that United Airlines actually tried to sue the 22-year old designer of Skiplagged in an effort to remove his site (spoiler alert: they failed).

This is a good thing, right?  The more a huge company hates something, the more likely that that something helps the consumer, right?

To avoid being banned, avoid signing up for frequent flyer programs with airlines or at least collecting points with them on hidden-city trips.  If you are signed up for one of these programs and using it when taking advantage of hidden-city ticketing, you are making it much easier for the airline to find you in their database and ban you.

Also, do not mention your plans to skip the rest of your journey to anyone.  Act like you are taking the second flight, especially around airline staff, because otherwise they could penalize you.  They have even started training their staff to try to sniff out people that do this in an effort to stop it so you gotta be extra careful.

In conclusion, hidden-city ticketing can be awesome if done right, but as with other pleasures in life, it must be done in moderation, lest you get banned from flying with an airline!

Skiplagged is also great at finding normal flight deals that Google Flights sometimes misses so I would still use it to check for flights even if you don’t want to do hidden-city ticketing!

To learn about some more ways to find cheaper flights, continue on to Part 4. 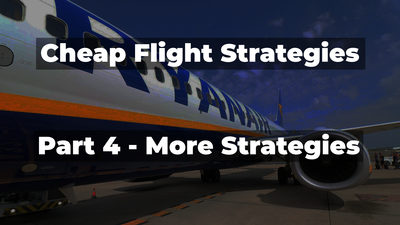