The Ultimate Guide To Hitchhiking While Traveling 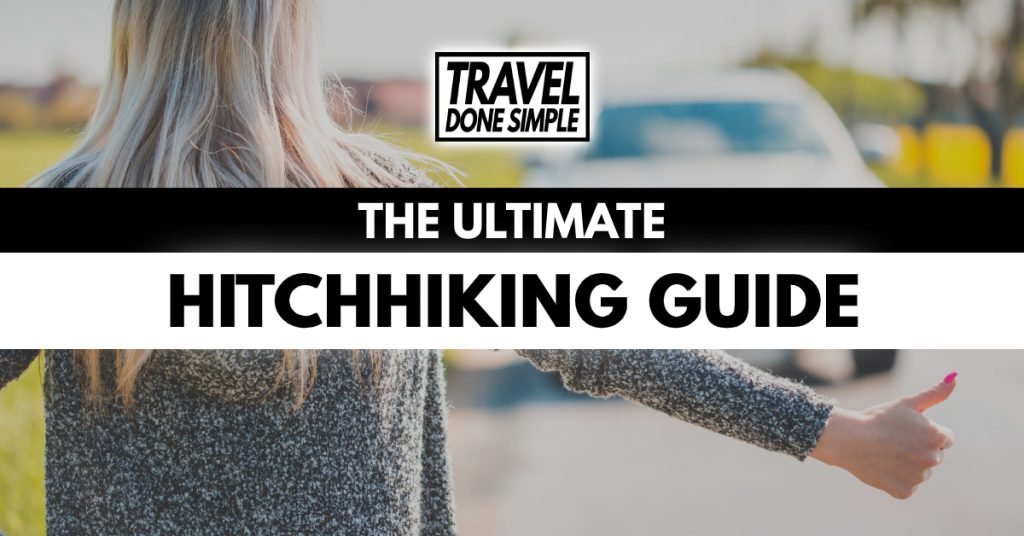 Almost everybody knows about hitchhiking, but most people have never actually done it.  If you don’t know about it, it essentially involves waiting on the side of the road hoping for a driver going your direction to pick you up and take you to your destination.

The practice started in the US in the 1920’s once the automobile became more and more prevalent in society and then exploded in the 1930’s as a result of the Great Depression.  Nowadays, it is a universal practice that many travelers use to get to their next destination, both because it’s free and because it lets them meet interesting people!

Even if you’ve never considered hitchhiking during your travels, it’s worth knowing how to do it in case you’re ever in a situation where it’s your only option because that can sometimes happen.  And if you like the idea of hitchhiking to begin with, then it could become the main way you travel!

I’ve personally hitchhiked a total of 5 times in my life, although usually out of necessity or because it was actually the best way for me to get to my next destination.  Learn more about my hitchhiking experiences in my blog post detailing all of them!

On this page, I will tell you everything you need to know about hitchhiking so that you’ll be well-prepared the next time you’re standing on the side of the road hoping for a ride!

Here are the 8 things you need to know if you plan to hitchhike:

You may feel self-conscious at first, but the moment you start doing it, you realize that it’s all in your head and you’ll never see those drivers that pass you by again.  Focus more on trying to find a driver that will pick you up and don’t worry about the ones that don’t!

2. You need to be aware of the local hitchhiking customs

Every country treats hitchhikers differently.  In some, hitchhiking might be super commonplace whereas in others it might not be practiced at all!  it’s important to do your research beforehand so that you know what to expect when hitchhiking in a new country.

If you’re not prepared, you might be mistaken for someone that’s looking for a taxi ride or even get a visit by the police because you’re trying to do it in a spot where it’s actually illegal!

A very good resource for knowing how hitchhiking is viewed in a country is by reading its page on Hitchwiki.  Simply search for the country you want to hitchhike in and you’ll get all the information you need about it.

3. You have to pick a good spot

If you’re going to hitchhike, you need to make sure you’re doing it in a spot that will give you the best chance at getting a ride because it’s very easy to waste hours standing on the side of the road if you’re in the wrong place.  In general, you want to make sure you’re in a spot where drivers can see you from a distance, they aren’t driving too fast, and it’s easy for them to pull over.

In addition, avoid doing it in city centers as it’s more likely that you’ll find locals driving from one part of town to the other rather than someone driving to another city.  The further away from the city center, the better.

One of the best places you can find a ride is at the entrance to a highway that goes in the direction you’re heading.  The chances that a driver will pick you up are much higher since most people taking the highway are planning to drive longer distances.

Another good place is a gas station near the highway since you can ask drivers in person which is better than hoping one stops for you!

Research your route in advance so you know which side of the road to stand on and which highway you should be taking.  Use Google Maps and Street View to find good spots ahead of time and check Hitchwiki for the city you’re in as it gives you some of the best spots that other hitchhikers have already found in every direction from that city.  Take a local bus or taxi to get to your spot if you need to!

4. A sign will improve your chances of getting a ride

While standing on the side of the road with your thumb in the air is the standard way to signal to drivers that you’re looking for a ride, it’s not the most effective.  The biggest reason why is that drivers won’t know where you want to go before they pull over which makes many of them less likely to do it!

In addition, the thumbs-up gesture is actually considered to be rude in some parts of the world, namely West Africa and the Middle East where it essentially means “screw you”.

The best way to indicate that you want a ride somewhere is to have a sign with you.  Instead of sticking your thumb out, take the time to write down the name of the city you want to go to on a piece of cardboard, but any large piece of paper will do, in bold capital letters in the local language and hold it out for drivers to see.

Drivers that know where you want to go before they pull over are more likely to do so if they’re going the same direction as you!  In addition, make sure to use eye contact when looking at drivers as it also helps to convince some of them to pull over for you.

5. Taking a ride for part of your journey is not a bad thing

It would be great if every driver that pulled over to pick you up would take you directly to your final destination, but those instances aren’t always possible.

Sometimes, a driver will pull over and offer to take you part of the way and your instinct might be to decline the offer, but you actually shouldn’t be afraid to take it as the closer you get to your destination, the easier it is to find another ride that will take you there.

Any ride that brings you closer to your destination is a good one so be open to it.

When you’re only being taken part of the way, figure out where the driver can drop you off so that you’re in a good spot from which you’re able to easily hitch a ride from another driver.

Talk to your driver and use Google Maps to find the best spot for you (I highly recommend having a Travel-Ready Phone with a Prepaid SIM Card when hitchhiking).  Gas stations along the highway are great spots.

6. You have to be flexible with your arrival time

As you may have already guessed by now, hitchhiking is not a method of transportation that should be relied upon to get to your next destination by a certain time.  Whether you have trouble getting a ride in the first place or you are only able to get rides for parts of your journey, you’re never guaranteed to arrive at any specific time.  To hitchhike effectively, you have to be flexible with your arrival time.

It should go without saying, but don’t use hitchhiking when you have to catch a flight or if you have an event to attend or something.  The earlier in the day that you start hitchhiking, the more likely you’ll get to your destination sooner.

7. Drivers are doing you a favor so act accordingly

People that pick you up from the side of the road and give you a ride to your destination for free are doing you a favor and you need to respect that.  Be polite and friendly when talking to them, from the moment they pull over to when you’re in their car to when they drop you off.

Be respectful and don’t treat their car like trash.  Get to know them since part of the hitchhiking experience is talking to and getting to meet a local that is courageous enough to pick up a stranger in their car!

In addition, make sure you look decent when trying to get a ride.  Nobody is going to stop for you if you’re dressed sloppily or you just don’t look presentable.  In the case of hitchhiking, first impressions are everything and the decision to pick you up is a split-second one.  And make sure you’re clean so you don’t dirty their car and so that you don’t have any strong odours which would make a driver regret having stopped for you!

8. It's important to stay safe

Hitchhiking is inherently risky.  You’re getting into a stranger’s car with no record of it (unlike when ridesharing) and you have no idea what their intentions might be.  Most of the time, the people picking you up are doing so because they want to help you out, but it’s important to be prepared and stay vigilant.

If you don’t like a driver or their car, or the driver seems to be impaired, don’t be afraid to decline their offer for a ride.  And if it’s getting dark, you’re better off spending the night in the city you’re in than trying to hitch a ride at night which is more dangerous.

And if it feels like a serious situation, one strategy that you can use to escape is to pretend like you’re about to puke in their car and ask if they can pull over.  Most drivers will not want to deal with that so they will pull over and once they do, grab your bag and get out.

Other things you can do for general safety is to pretend to wave goodbye to someone when you first get into the car to give the impression that you were seen getting into it, keep your valuables on your body and your other belongings close to you, and pretend to give your friend a call when you’re in the car mentioning the driver’s name and type of car they drive.  For example: “Hey Justin, yeah I’m on my way now, this cool guy named John picked me up.  Look for a black Toyota Corolla when I get to Seattle”.

Hitchhiking can be an exciting way to travel as you never know who is going to give you a ride and you get to meet some interesting people as a result.  It’s the cheapest way to travel since it’s free and can be done pretty much everywhere in the world!  As long as you know how to do it as well as how to stay safe, you shouldn’t have any problems getting to your next destination via hitchhiking.

Let me know about your hitchhiking experiences in the comments below and if you’d like to learn about a way you can get accommodation for free too, check out my Guide to Couchsurfing. 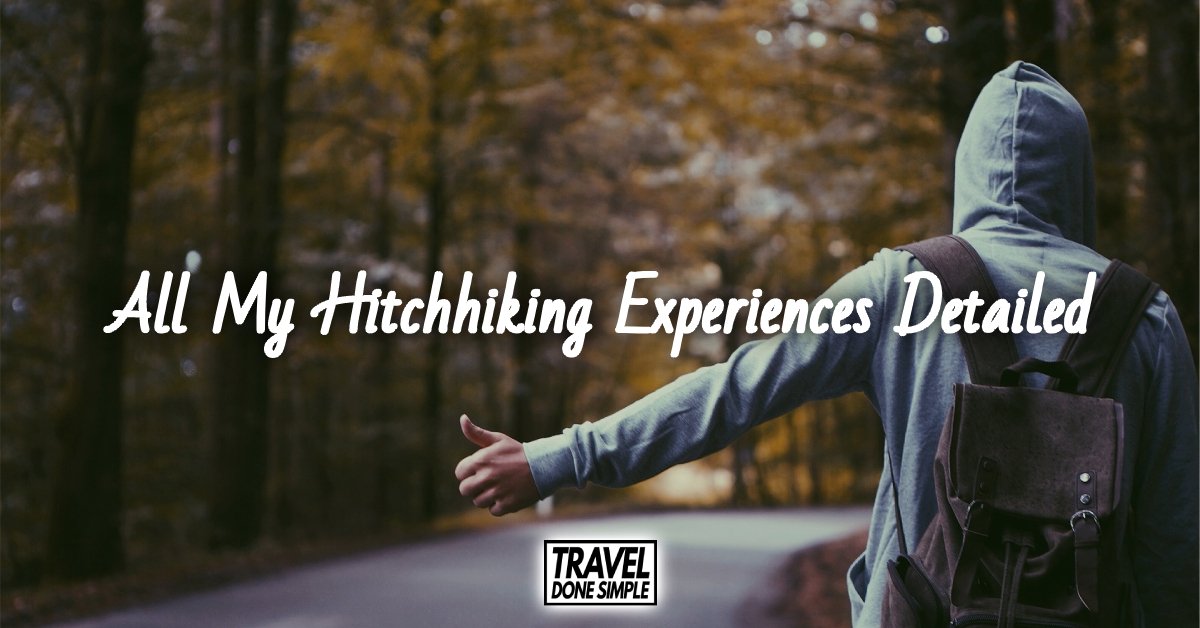 Hitchhiking can be a somewhat controversial topic for travelers.  Some people swear by it and do it all the time whereas others would never even consider it.  This is because