Even More Strategies To Fly For Cheap

Part 4 of the Guide To Cheap Flight Strategies 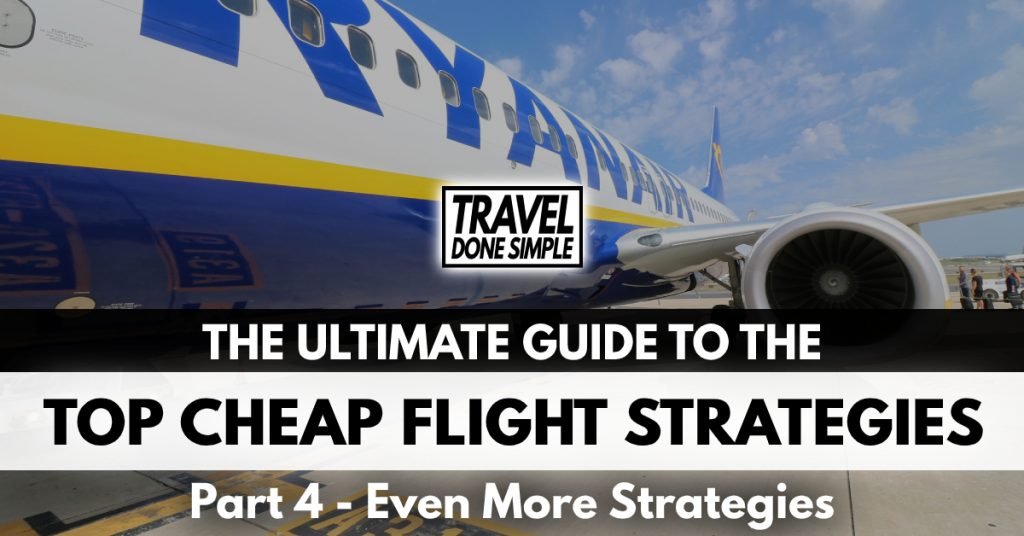 This page may contain affiliate links which means I get a small commission, at no extra cost to you, if you make a purchase with them. This helps keep the site running and the travel tips coming! For more info, check out my Privacy Policy & Disclosure.

Welcome to Part 4 of my Guide to Cheap Flight Strategies.  On this page, I’m going to tell you all about a few more ways that you can find the cheapest flight deals out there.

The main one I’m going to talk about on this page is specialized travel deal websites.  If you have a flexible schedule, these websites can save you lots of money.

Their sole purpose is to continually look for airfares and holiday packages that are significantly cheaper than usual and communicate them to people.  They look for specific deals from airlines and travel agencies, pricing mistakes, and glitches in the system, and inform their audience as soon as possible of the potential savings.

The thing about these types of websites is that most often, they are only able to find deals originating from specific locations.  They aren’t going to be scouring for deals from every city in the world.

That being said, if you find one that looks for deals from your city, you could save a whole lot of money on your next trip.

One notable exception to this is Secret Flying.  They actually look for deals originating from more than just one or two countries and they’re my favourite specialized travel deal website out there.

For example, here’s a deal from Secret Flying that was posted the same day I wrote this:

These sites can be extremely useful and can help you figure out where to go for your next holiday, but to really be able to take advantage of them, you need to have a fairly flexible schedule.  The deals they are able to find for you are usually for specific dates and if you can’t make those dates, then you’re out of luck.

In addition, most of the time you’ll need to act fast when you see a deal you like because more often than not, these cheap prices are actually error fares that the airlines or OTAs never intended to sell the flight for so they often get fixed to their normal prices within a few days or even hours!

Secret Flying is but one of many websites that find deals just like this for lots of different countries.  Some come with a subscription service that promises more deals sent straight to you and others just rely on ad revenue/referrals.

Here’s a list of some of the biggest ones that search for cheap deals based in a few different countries:

Based in the USA:

If you live somewhere other than the countries I mentioned or you simply want even more options to choose from, you can also use Secret Flying as I mentioned earlier as they post deals for every part of the world.

They have a page for the US, Canada, Central America & the Caribbean, South America, Europe, Middle East & North Africa, Africa, Central & South Asia, East Asia, & Oceania. Go to their home page to see what deals they have for your region!

These are all the specialized travel deal websites that I know of.  If anyone has any to add for any other countries, do leave a comment and I will add it to the list!

Other quick tips for booking the cheapest possible flights:

Using all the strategies I have shown you in this guide, you will never have to pay full price for a flight ticket again!  Let me know if this guide helped you out and if there are any other strategies that you think I missed, tell me about them in the comments below.

And if you want to learn about budget airlines and how they will be your best friend while traveling, check out my Guide to Budget Airlines.