The Ultimate Guide To Getting Cash While Traveling 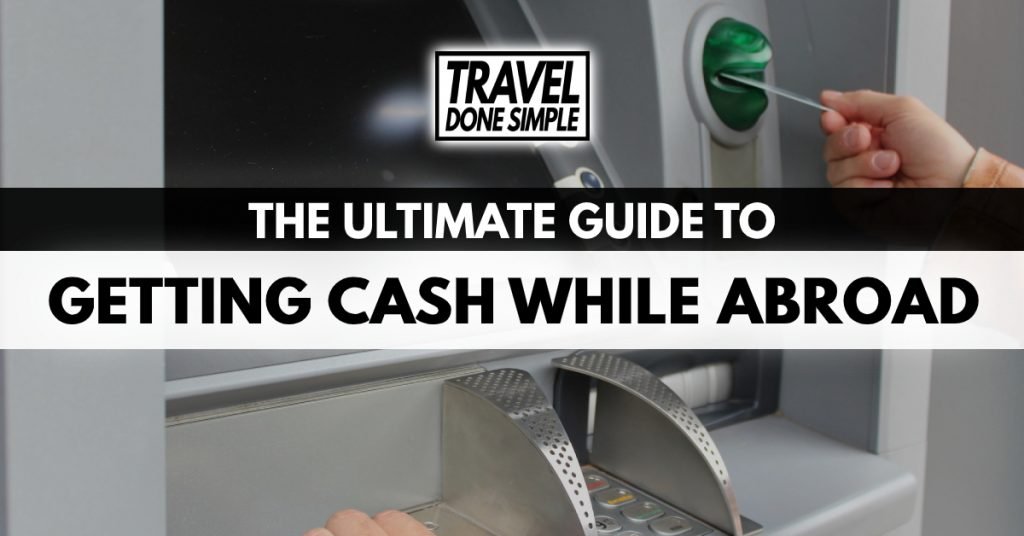 No matter where you travel in the world, you will most likely be paying for something with cash at some point.  Therefore, it’s very important to know how to get cash when you’re abroad, especially when the place you’re going to uses a different currency to yours.

There are a few different ways you can do it, but some ways are better than others and you need to know the tricks to avoid paying extra fees that you really don’t need to pay for.

A lot of people think that exchanging cash at foreign exchange offices, whether at home or abroad, is the best or even only way to get cash, but it is actually one of the worst ways.

The actual best strategy is to wait until you are in your destination and take out cash using local ATMs. This is because foreign exchange offices usually either have bad exchange rates or charge a high commission (it’s how they make their money, after all).

On this page, I will show you everything you need to know about getting cash while traveling and how to avoid paying for unnecessary fees.

*The following information mainly applies when you’re traveling to countries with different currencies.

1. Have a no-fee debit card

To get cash from any ATM, you will need a debit card.  Having the right debit card for foreign ATM withdrawals is extremely important as it can saving hundreds or even thousands of dollars a year on fees that you don’t need to pay!

If your current bank offers a card like this for you, then great! But unfortunately, most banks don’t so you might have to look for a different one.

I wrote a whole guide on the best debit cards you can get for traveling, including which banks offer them, which you can find here: Guide to the Best Debit Cards for Traveling.

2. Use ATMs to take out cash

The first thing you should do when you arrive in your destination is to take out some cash from an ATM because, unlike foreign exchange offices, the only fee they can charge you is a usage fee if you know how to avoid the others.

And sometimes you can even avoid the usage fee if you’re lucky to find a partner ATM or a no-fee one!

Plan out your withdrawals and avoid taking out more cash than you will need (unless ATMs charge flat usage fees, in which case limiting the amount of times you use them is better than using them often).

The ATM will be your best friend as you travel.  However, foreign ATMs have sneaky ways of taking your money.

Apart from the obvious way of charging you for using the ATM in the first place, they also take money from you by confusing you with different currencies and using a terrible exchange rate when you let them do the currency conversion during withdrawals.

How do you avoid all of this?  There are a few ways…

While banks themselves will charge you for foreign ATM withdrawals if you don’t have a good debit card, the ATMs themselves will also charge you a fee if they don’t belong to your bank or their partner network.  The fee can range anywhere from a flat fee of $1-$10 to a percentage of your total withdrawal amount (usually between 2-5%).

To avoid paying for these fees, you should do your research ahead of time and find out which ATMs you will be able to withdraw money from for free, either because they are part of your bank’s partner network or because the ATM owner hasn’t imposed any such fees.  If you’re lucky, you’ll find an ATM that will let you withdraw cash for free.

However, most of the time you won’t be so lucky and you won’t be able to find any free ATMs.  In this case, you’ll have to figure out which ATMs charge the lowest fees. There is no easy way to do this unfortunately and every way you do it will take a little effort.

One way is to spend some time searching online on internet forums or blog posts for information about the types of fees that each of the major banks in a country charges, but you won’t always get the most accurate information this way.

The only other way to do it is to test the ATMs of all the major banks in that country once you arrive and note down the fee that each bank charges.  Just put your card in, go through the withdrawal process, and when the ATM tells you how much the fee is, write it down and press cancel to avoid getting charged.  Compare all the banks and ATMs to figure out which ones have the lowest fees.

Once you know what the fees are, you’ll know which ATMs to avoid and which to look for.  If one ATM charges a flat fee and another charges a percentage fee, the best way to proceed is to use the flat-fee ATMs for large withdrawals and the percentage-fee ATMs for small ones.

You may have to do a bit of math to figure out when the fee will be smaller if using a percentage-fee ATM, but it’s worth it if you’re serious about saving money.

4. Make sure you know the exchange rate

You should always do your research and know what the exchange rate to your home currency is before you arrive at your destination so you are prepared and you don’t get confused by all the different numbers.

This is because when you are withdrawing cash from ATMs, some of them will have default withdrawal options that are way higher than what you need and if you don’t know what the exchange rate is, you may end up taking out more money than you expected.

This happened to me the first time I visited Budapest, Hungary.  I arrived at the airport and went to take out cash from an ATM.  I naively assumed that the default options displayed to me were equivalent to the same options I get from my bank’s ATMs at home ($20, $40, $60, $80, $100, etc) and I didn’t have internet to check what the exchange rate was so I naively trusted the ATM and selected the middle option which was 150,000 HUF.

This ended up being $500 instead of the $50 I was expecting.  I only realized my mistake when all the bills started coming out.  I only spent 2 days in Hungary so I was forced to exchange most of that before I continued onto my next destination.

Lesson learned: always know what the exchange rate is and select “enter amount” if the ATM doesn’t give you any reasonable options to choose from.

It also helps to have a currency conversion app on a travel-ready phone with a local prepaid SIM card that you can use to tell you the exchange rate in real-time if you didn’t do my research beforehand.  There is also a currency converter in each Destination Guide.

5. Never let the ATM do the conversion for you

ATMs make a lot of money on travelers that assume that the exchange rate that is offered by them is the official one and not simply one that the ATM owner can make up.

The truth is that when you are asked if you accept the exchange rate that an ATM gives you, 99% of the time it is way worse than what you would get if you let your bank do the conversion for you instead, even if you have a debit card with a foreign currency conversion fee.

To avoid getting ripped off by the ATM, you should always choose to withdraw money in the local currency and not in your home currency because your bank will always have a better exchange rate than foreign ATMs.  ATMs have different ways of hiding their bad exchange rates so you have to pay extra attention when making a withdrawal.

Some of the ways they word it (and the one you should select in bold) include:

6. Exchange money at currency exchange booths as a last resort

I personally rarely exchange money at these types of booths because most of them use bad exchange rates or charge high commission that should really not be legal.

However, there may be times when you have no other option, either because there is no ATM nearby or because you have a lot of cash left in one currency that you need to get rid of anyways.  Therefore, it helps to know how to get the best deal when using them.

Here are some tips:

Nobody likes to pay more than they need to for anything and the more we can save on unnecessary fees, the more we can use to spend on our trips!  It’s good to be aware of the different types of ways that foreign ATMs and currency exchange booths can squeeze extra money out of you so that you can be prepared to avoid them.

If this guide helped you out, let me know in the comments below.  And if you want to learn about which travel accessories you should get for your trip, check out my Guide to the Top Travel Accessories.