The Ultimate Guide To Traveling By Train 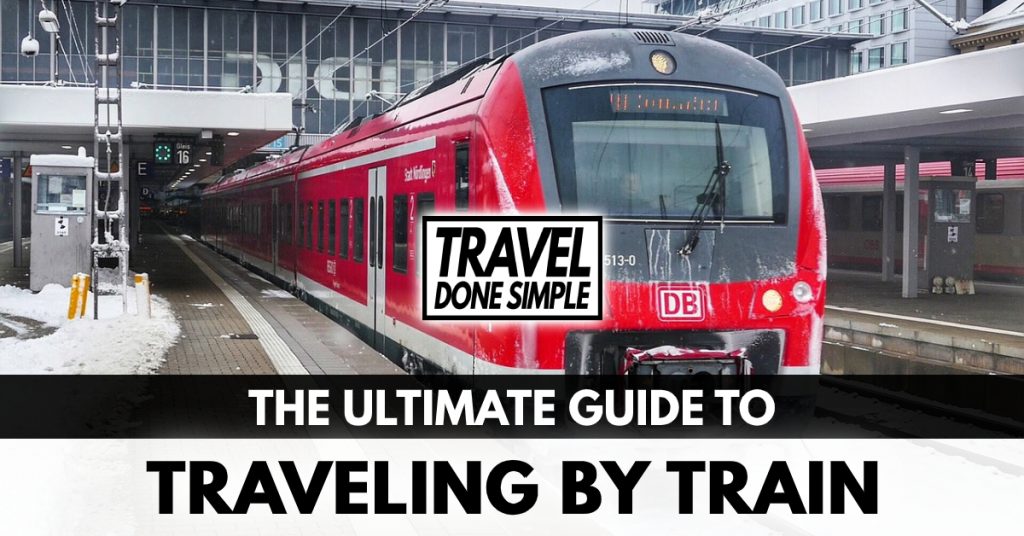 This page may contain affiliate links which means I get a small commission, at no extra cost to you, if you make a purchase with them. This helps keep the site running and the travel tips coming! For more info, check out my Privacy Policy & Disclosure.

Commercial rail travel has been around since the 1800’s and with the hyperloop around the corner, innovations in this method of transportation are still being made to this date.  The current fastest commercial train in the world can be found in China traveling between Beijing and Nanjing, reaching top speeds of 350 km/h (218 mph)!

The train has become a very useful way of traveling in many countries around the world, especially in Europe and East Asia, and one that you should definitely consider using on your next trip.

On this page, I will tell you everything you need to know about traveling by train so that you know exactly what to expect when you book your ticket.  I will focus on trains that travel between different cities.

If you’re looking for information on metro/subway systems and other inner-city rail travel, check out my Guide to Public Transport.

So without further ado, here are the top 8 things you need to know about traveling by train:

1. Your experience will vary widely depending on the country

If you’ve never been on a train before, you’re in for a treat.  There’s a reason people like to collect and build model train sets.  It has captured the imaginations of many and can be a magical experience if you’re prepared, but it can also be a stressful and uncomfortable one if you’re not.

This because while many countries have rail systems, it doesn’t mean that you will have the same experience everywhere.  Even within Europe, the birthplace of commercial rail travel, the level of service you get from each country can vary widely.

The experience usually involves getting assigned a seat (or maybe not) and getting taken to your destination via rail.  Some trains will come with air conditioning, but some will not.  The long-distance trains will have a toilet on board, but the regional trains probably won’t.  Some fancier trains might offer wifi, but it’s not a guarantee.  Changes and cancellations also depend on the country and service as there is no standard that exists for this sort of policy.

In developed countries that invest a lot of money into their rail system, you can probably rest assured knowing that it will be an enjoyable experience, but I can’t say the same for others.  For example, have you ever seen those photos of trains in India that are so overcrowded that there are people hanging onto the train from the outside?

I don’t think most travelers are looking to have that type of experience so it’s important to do your research and be well-informed so you know what you’re getting yourself into.  Do a Google search for “train travel in ____” to get an idea for what it’s like in your destination.

2. Trains are usually cheaper than flights, but more expensive than buses

But not always.  There are also times when it goes the other way too.

In addition, trains are usually slower than flights, but faster than buses, but again, not always.  Sometimes a high-speed train can get you to your destination faster than a plane can if you factor in the amount of time it takes to get to and from the airport, check in, go through security, board, etc.

And on the other end, sometimes a train service is so slow that even a bus can get you to your destination faster so it’s important to look at all the details.  Check out my Guide to Bus Travel if you want to learn more about traveling by bus.

3. There is no such thing as Google Trains

Unlike Google Flights, there is no one website that exists that will let you see the schedules and book trains for every country in the world.  Depending on the country and region, you will either have to go to the national railway’s website for that country to get that information or go to the local train station in person.

I provide links to each country’s national railway website in its Destination Guide as well as other information if there is no website.

That being said, a good way to see what train operators there are for any route you’re looking for is to check Rome2Rio.  The best thing to do is to note down the train operators it finds and then check out their specific websites to see schedules and pricing.

And if you’re traveling in Europe, a great resource for seeing train schedules for any European country and itinerary is bahn.de/en.  It has schedules for every country in Europe, but it won’t show you fares unless the ticket originates in Germany.

To see fares, you’ll have to use the national railway’s website for that country or an online travel agency (OTA), although OTAs usually charge more.  A good OTA for Europe is Omio and for Southeast Asia, East Asia (not including South Korea), Australia, New Zealand, and some destinations in South Asia, try 12go.

4. Booking in advance isn't always necessary, but it is advised

Some train companies have caught on to the airline pricing model and have started to price their train services in a similar fashion with cheaper prices if booked early and expensive prices if booked on the same day, but this doesn’t apply to every company and every service.

You will typically only see this from long-distance, international, or high-speed trains, sometimes labeled “inter-city”.  The best time to start looking for tickets for these types of trains is no sooner than 3 months in advance because that’s when most train operators start selling them.

But if your train isn’t a high-speed one and is traveling to another destination within the same country that isn’t too far away, the price will be fixed and they won’t sell out of tickets (assuming there isn’t some massive event happening at that time) so you don’t have to buy your ticket in advance.

You can just show up to buy your ticket from the ticket office or ticket machine 15 minutes before your train is scheduled to leave for the same price as if you buy it months in advance.  This type of service is typically for trains labeled “local”, “regional”, or “suburban”.

5. You aren't always guaranteed a seat

Unless your booking gives you a seat number or you choose to reserve a seat for an additional fee, you aren’t guaranteed a seat on the train.  This doesn’t mean that you won’t be able to take that train even though you have a ticket.

What it means is that you’ll be able to choose your own seat that isn’t already reserved once you get on board and if there aren’t any seats available, then unfortunately you’ll have to stand or sit against a wall for the duration of your train journey.

Some long-distance, international, and high-speed trains will assign you a seat so you won’t have to worry about this, but if it doesn’t and you choose not to reserve one, most trains around the world operate on a first-come, first-serve basis so you take whatever seat you can find and if you can’t find one, then you’ll have to prepare to stand until one opens up.

6. You don't need to check in for your train

This is one way that train travel differs greatly from air travel.  When you go to an airport, you have to show up at least an hour early, if not more, to give yourself time to check in, drop off your luggage, get through security, find your gate, and board the plane, but with train travel, it’s much easier.

Most of the time, as long as you have your ticket, you could theoretically show up at the station just 5 minutes before your train is scheduled to leave and have no problems catching it (although I do recommend arriving at least 15 minutes before just to be safe).

Sometimes you will have to go through security if that country has implemented such policies, but it’s usually quite swift.  And if you’re traveling on an international train, then you might have to go through passport controls too, but other times that happens on the train by border control that comes on board and checks everyone’s passports.

You carry your luggage on with you and store it above your seat or in a special little section of your train car for luggage.

There’s a pass you can get for train travel in Europe that lets you travel on an unlimited amount of trains for a set amount of days ranging from 3 days to 3 months and it’s called the Eurail / Interrail (for Europeans) or RailEurope pass.

It essentially offers you maximum flexibility if you want to travel by train in Europe without planning ahead for it because all you have to do is show your pass and you can board any train you want (except for high-speed and night trains).

Here’s the catch: the pass is more expensive than simply booking the train tickets separately by yourself in advance and there is also an extra cost if you do want to take high-speed or night trains as they require seat reservations which can cost between $7-$30 per seat.

The pass is good for people who simply want the easiest way to explore Europe by train only and who don’t really care about their budget, but if you’re okay with taking different methods of transportation or you want to save money, I do not recommend it as there are better ways to get from one destination to another.

Some train routes pass through areas that are inaccessible by cars which can lead to some marvelous and spectacular views.  Just think of Switzerland.  It has a very well-developed rail system that connects every town and village in the country.  Train rides there can be so spectacular because they pass alongside mountains where there aren’t any roads, giving you unparalleled views of the scenery.

There’s only so much I can write about trains that either hasn’t already been written or that you just need to experience for yourself, but I hope that you got a better general understanding of them from this guide.

Let me know in the comments below about some of your train experiences and if you’re looking to learn about buses and how they differ from trains, check out my Guide to Bus Travel.