The Ultimate Guide To Using Public Transport While Abroad 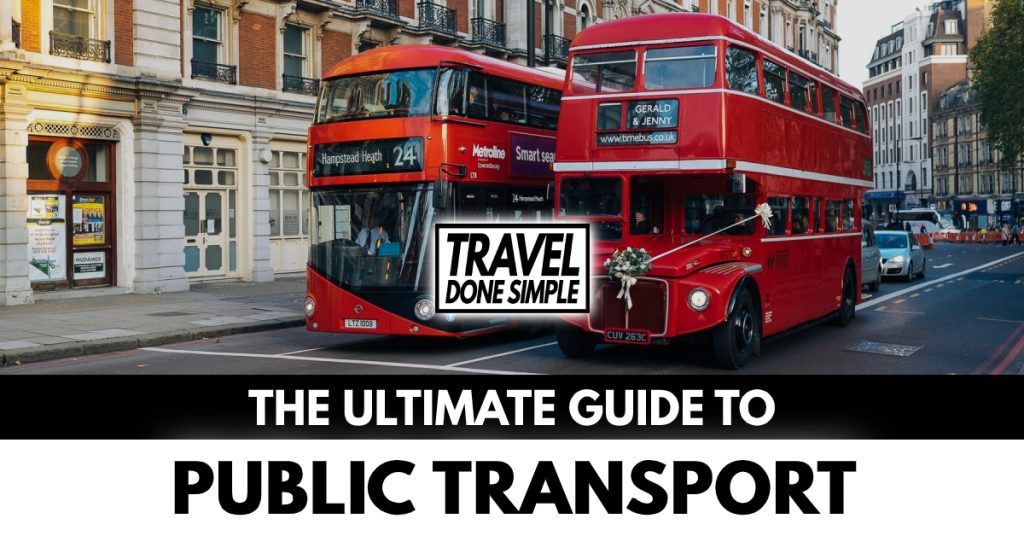 Taking public transport to get around is way cheaper than any of the other alternatives.  In fact, some countries and cities around the world are even flirting with the idea of offering it for free (Luxembourg and Tallinn, Estonia being the largest that have actually done it)!

But even if it’s not free, one of the best things you can do is use the local public transport system to get around if you want to save money and do as the locals do.

Public transport takes form in many ways: everything from local buses, to metro/subway systems, to trams and monorails, to small passenger ferries.  Every city and destination is different when it comes to public transport, but they also have many similarities and it helps to know what to expect in preparation for your trip so that you don’t get lost in the sea of different options available when you arrive.

The best thing you can do is to research the public transport situation in your destination before you go on your trip, but on this page I will provide you with a general overview of what to expect no matter where you go.

1. A map will be your best friend

Even before you arrive in your destination, one super useful thing you can do is check if its public transport system is represented on Google Maps.  For those that may not know, Google Maps can show directions when using public transport in many cities around the world.

Keep in mind that if you don’t see any public transport options on Google Maps, it doesn’t mean that there isn’t public transport available.  Some cities have chosen not to share their schedules with Google Maps so you will still need to do your research online to see what the situation is, but checking to see if the public transport is on Google Maps can save you lots of time assuming that you plan to travel with a Travel-Ready Phone and Prepaid SIM Card (which I highly recommend).

Some cities or local public transport systems will also have their own apps that act in a similar fashion to Google Maps.  If your destination is represented with public transport schedules and itineraries on Google Maps or another app, then you can rest assured knowing that you can check for these schedules on the go.  When you’re already in your destination and you need to get somewhere, just load up the app you need and check for transit directions right then and there.

And if your destination isn’t represented on Google Maps and doesn’t have its own app either, then you might have to just go the old-fashioned way and use actual maps!  Most public transport systems display their route maps and schedules in metro stations and bus stops and sometimes in the metro and buses themselves.

It’s also helpful to get a hold of a paper map that you can look at whenever.  See if you can get one from the tourist information office when you arrive.

2. The ticket types will vary

If you’re lucky, the different types of public transport in your destination will all be interconnected as one system which uses the same tickets no matter which type you take, but this won’t always be the case.

For example, in Manchester, England, the local bus companies are privately owned which means they compete with one another and which means a ticket bought from one company will not be valid on another.  In other cities, the bus system might be separate from the metro or ferry systems which means having to get different tickets each time.

Keep in mind that if you aren’t able to pay for your tickets by card, it’s useful to carry small change with you because some machines or drivers might not be able to give you change.

The tickets might also come in the form of cards that you have to pay a deposit for and in some destinations, you might also be able to pay by tapping your credit card (like in London), thus completely eliminating the need to buy tickets in advance.

Another thing to be aware of is whether or not you have to validate your ticket after you’ve bought it.  A ticket purchased from a machine or a driver might be validated instantly, but in other places, you might have to validate it yourself before boarding by getting it stamped.  And they are typically only valid for a set amount of time usually ranging from one to two hours.  Not realizing you have to validate the ticket that you’ve already bought or traveling with an expired ticket can lead to fines if you get caught!

And finally, a lot of cities often implement a zone system in which a 1-zone ticket will only be valid for travel from stops or stations in a certain part of the city or for a certain distance from the center and if you want to travel further than that, you will have to purchase a 2-zone or higher ticket.

For example, the public transport system in London has 9 total zones!  If you get caught with a ticket that isn’t valid for the zone you’re traveling in, you could get fined.

And don’t be afraid to ask a local either; someone who uses the public transport system every day should know a thing or two about it!

3. Passes can save you money

A lot of cities around the world offer tourist passes or city cards which let you take the public transit in the city for a set amount of days and also come with discounts to certain attractions in the city.

They can be really useful if you’re planning to visit some of those attractions anyways as you can save a bit of money, but if you aren’t planning to do that, then you should look into day or weekend passes as well because those tend to be cheaper than tourist passes.

I’ve found that a day or 24 hour pass starts saving you money if you plan to take public transport more than 2 or 3 times a day, depending on the city.  Some cities might even offer 2 to 5-day passes as well so if you know you’ll be moving around a lot over several days, look into those as they can be a lot cheaper than buying one-day passes each time!

Some cities might also offer single tickets in bunches of 5 or 10 which can be cheaper than buying 5 or 10 single tickets separately.  Check all your options and plan ahead so you know which ticket or pass option saves you the most money!

4. Schedules are different in every destination

In some major cities, the public transport system will run 24 hours a day, 7 days a week, but in most cities, it typically ends at midnight and starts up again at 5am or so.  There might also be a service interruption happening which closes a metro line that you planned to take.

That being said, some cities also have night buses that provide service for some routes from 12 AM – 5 AM as a way to still give you an option even if the main services are closed.  It depends on the city, but the key point here is that you should never assume the public transport system in your destination is always available.  Check out the situation in advance.

Public transport is usually safe, but it is still a good idea to stay vigilant when you take it.  Pickpockets like to do their work in crowded spaces and public transport tends to offer a lot of those.  Keep your bags near your body and your valuables away from loose pockets and if you see someone shady, don’t be afraid to move to another part of the station, bus, or train.

In addition, avoid taking public transport at night if you don’t have to.  Plan your route out well and keep an eye where you’re going so you don’t miss your stop and end up in the middle of nowhere or a sketchy part of town.

Public transport is a great way to get around your destination and as long as you do it right, you can save a lot of money doing it.

Let me know if this guide helped you out in the comments below and if you want to learn about the best travel accessories to take with you on your trip, check out my Guide to the Top Travel Accessories!